In 2006, my family traveled across the country to move out west.  Below are some excerpts from that trip concerning our cat, Boca.

Travel Journal – Day 1:
We are really impressed with Boca’s traveling style.  He likes to sun himself on 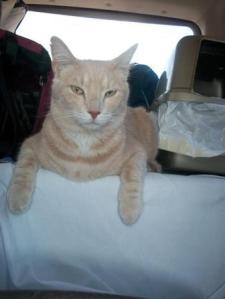 the dash of the car, which actually is rather cool until we slow down or turn and he slides off.   And then there is the kitty litter box.  We thought we were smart and purchased a “travel litter box” before we left.  Well, our 18 lb cat squatted in it one time and then gave us this look like, “Can’t you see that my ass is going to get stuck in this stupid thing? Please don’t tell me I have to use this for the next 1,900 miles.” So we had to make a detour on the way and go back to the regular sized one.  Heaven knows you don’t want to take any chances with cat piss, right?

Travel Journal – Day 2:
There was this “cat-cident” tonight.  When we got to the hotel after traveling all day through Kansas, there was this huge armoire in the room.  Boca would try to jump up on top of it to no avail because it was out of his reach.  Then he started giving me this pitiful pleading look.  So I picked him up and he jumped right on top of the armoire.  I didn’t realize that the corner armoire didn’t go all the way back to the wall.  Of course the next thing Boca did was jump down into the tiny area behind it.

Now, I am all by myself suddenly realizing what an extremely BAD IDEA it was to put him up there in the first place.   Boca is now a very unhappy kitty which you could tell from his howling and carrying on because he is now hopelessly stuck behind the armoire.  My husband, Michael comes bolting into the room because you can hear this anguished cat all the way to the hotel lobby.   Obviously my husband is not very happy with the situation.  We tried taking out the drawers but that didn’t work. Then we found a small hole behind the TV set but only Boca’s head could fit through-which means we could now see his poor face meowing for help.  Finally with a huge heave-ho, my husband moved the armoire just enough to get the cat out.  And Boca bolted when he saw the
chance.

End of story, right?   Except I was stupid enough to apologize for putting him up there in the first place.  The response I got was: “You mean you put him up there ON PURPOSE?!”  Well, that started up the lecture I really didn’t need.  We are all tired here, okay?

And that was The End of Day 2.

I guess the guy working the To Go window at Taco Bell wasn’t prepared to have a big cat stick his head out the driver’s window when I picked up our food order.  He screamed like a little girl and spilled all my drinks on the side of the van. I know Boca was just being curious.  But I still think I saw a smirk on his face.

Travel Journal – Day 4 (somewhere in Utah):
Boca finally gave in.  He said, “Fine.  Put the damn leash thing on me so I can at least get out of this van.”  He did wonderfully in the rest areas until this mean dog got away and ran after him. I don’t think the dog’s parents were expecting to see a cat at the end of the leash.  Believe it or not, Boca was ready to fight.  But in the end, the dog’s parents apologized profusely, I picked up Boca and put him back in the van and he hissed at the dog through the window.

But if there had been a fight, I would have put $20 bucks down that Boca would have whipped that dog’s ass.

One response to “Road Trip with Boca-cat”