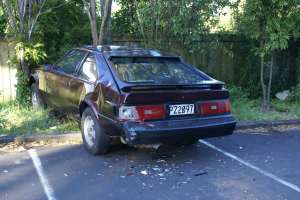 I had the opportunity to watch valet staff during my stay at a local resort in San Diego. And I was quite impressed. Watching the valet staff do their thing made me wonder if I could be a valet attendant. When I used to live in Las Vegas we would half jokingly say that we hoped our teenaged son would never learn that he could make $40,000 a year valet parking cars at the Bellagio.

But there is one major reason I know that I can never work valet; frankly I cannot back a car up. And I don’t mean it’s a slight issue – I am talking about incidents where tow trucks were involved and includes endless anecdotes of “remember when Lori backed into (insert any noun here).”

However, I refuse to take total responsibility for my lack of backward driving; I place some of the blame on my high school driver’s education class. In which I received a “B.” (Okay, so I don’t actually remember what grade I got in the class but I am sure it was either an “A” or “B” because those were pretty much the only grades I ever received in high school). I do remember this one incident involving improper use of the braking mechanism and backward rolling of an empty vehicle. And the reason I remember it so well is because it scared the shit out of our driving instructor.

And then there is this one story early in my driving career involving the neighbor’s cornfield and my mom’s 67 yellow Ford with a hand choke. (I don’t really know what a car choke is for. I just know it impresses people – okay, guys – when I said I had one). Our house was surrounded by four cornfields and had this really l-o-n-g driveway. One day I was attempting to back out and turned the steering wheel the wrong way. I remember it was spring because the field was incredibly muddy. Once my back wheels hit the field dirt, there was no way out. I had to walk down to Farmer Dan’s house and sheepishly say, “I’m sorry but my car is stuck in your cornfield. Can you come help me?” So I hopped on the back of Farmer Dan’s green tractor and down to our house we went. Farmer Dan easily towed my car out of his field although I didn’t appreciate the fact that he must have asked, like a hundred times, how in the world I managed to get my car stuck in there in the first place.

So, I’m thinking I would probably get fired once my valet boss realized I could not properly back up cars. Well, it would be that or the whole “What? You want me to run?” requirement. And as an added thought:  Do you think I would need to learn how to drive a stick?

One response to “Essential Job Duties of Valet Parking”