I cannot begin to tell you how excited my husband and I were when my 22- year-old daughter FINALLY decided to get serious and go to college.  She started off with a summer online course in World History.  Christina has never enjoyed school so taking this seriously was going to be a lot of work on her part – we all knew that going in.  And while I wanted to be supportive of her in this new endeavor, I truly had no interest whatsoever in actually going back to school with her. 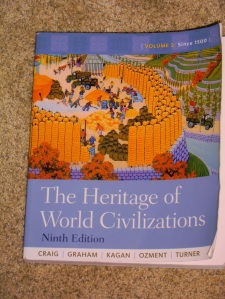 First of all, this was a sophomore class so right away she would be challenged.  And then there was the textbook.  The textbook from hell that took 18 paragraphs to tell the reader that the newly widespread use of the printing press was a major factor in knowledge and globalization.  And that there is another Martin Luther and that slavery existed well before it was exploited with the new worlds exploration.

So we began the course with Christina telling me she read the first chapter “three times and I still don’t get it.”  First of all, I am sure she only skimmed the first chapter and when she saw chapter edits of The Edict of Nantes and the Treaty of Westphalia she just simply lost interest.  Except that as soon as I read that, I did too.  So at the beginning I had to simply read the chapter and then explain it to her in terms that were greatly simplified.  I made her look up exactly what the Diet of Worms was (a meeting in Worms, Germany where Luther defended his religious teaching) and what they meant by indulgences (a forgiving of a penalty imposed by priests for mortal sins).

But I think my biggest mistake was making the comment: “Well, it’s not like you are going to get an A in the class.”  Evidently as a mother, I am SUPPOSED to be more supportive than that. It is one of those statements that as soon as you say it, you regret it.  I tried to back pedal and tell her I was using reverse psychology but even I knew that sounded lame.  Ultimately this meant that I got to hear the exact phrase recited back to me when I painted the hall closet and took a training class.

When Christina took her quizzes, I would try to guide her in the right direction.  Which meant I would write down “She said C but the correct answer is B” and then show it to her when she finished and found out she got the question wrong. (I still love being the smartest.  Amazing how that feeling never really goes away).

Okay, fast forward because it was a 5 week course.  She got a B and was very happy with her grade.  When she told me she was going to burn the text-book at our next bonfire, I told her that she could actually turn it in and get money for it.  That was something else she learned.

All I can say is that when she begins her full time classes in the fall, I am not helping her with the math.

2 responses to “Back to School”