They All Just Hate Me

Let’s get one thing straight.  I DO NOT HAVE any personal issues with plants. I like plants. I really do. The problem is that they all hate me.  Doesn’t matter what kind, how big, how healthy, how old.  If I am given responsibility for a live plant you can be damned sure it is going to die.

Not right away. But eventually.

Early in our marriage my husband gave me a very nice cacti planter. 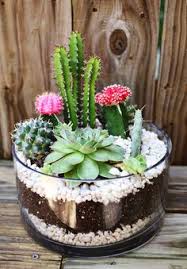 It looked so pretty on my desk at work but despite all my efforts, one by one the cute little cactus would perish and die. Two years later my husband came to my office. He took one look at the decorative ceramic pot with only two living cactus left and without saying a word picked it up and took it away from me.  Under his care, it thrived for years until the cat got bored one day and dug them up.  At least their final death was not my fault.

Then the one with the green thumb left.  Despite my husband’s detailed plant care instructions: special plant water under the sink in the plastic bottle labeled PLANT WATER, water at least every other week, let them drain in the sink, DO NOT MOVE THEM from their current spots, I was immediately overwhelmed.  Because I already knew this was not going to end well.

I swear, all I wanted to do was pluck out the dead leaves. This is what happened: 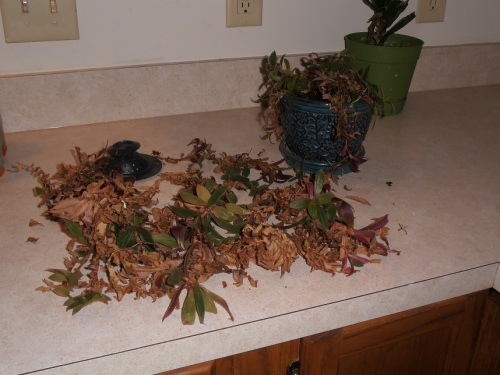 I think that it was some kind of plant root disease. Or plant suicide. Maybe the cat did something to it.  I tried to push the green ones back in the dirt and it just didn’t work. The plant had clearly given up on his life.  This was so not my fault.

Then there was this one:

Okay, I’ll totally own it.  I tried.  I really did. I watered and put it outside in the sun and talked nice to it and told it to just hang on for a month or two and the one who really loves it will come back and fix it all. Didn’t happen.

I knew my husband would probably notice how bad it looked and be upset so I put this one outside so he wouldn’t see it. So there it sat. Inside the blue recycle bin next to the lawn sprinkler. Then one day I discovered this: 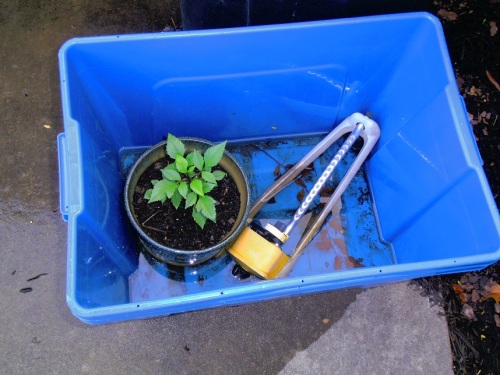 A Miracle!  A plant that I didn’t totally kill.  It still has a chance and obviously wants to live.  One thing is absolutely for certain: I am NOT going to touch it.

This entry was posted in General and tagged dead plants, green thumb, plants. Bookmark the permalink.