A normal person would probably think that I meant this:

But then there are those of you who know me.

So you know that I really mean the literal one. And I did seriously contemplate whether this would be a good blog topic.  I even asked my friend, Karen.  She said yes, so  blame her.

I was sick for over two weeks and finally decided to go see my doctor to get those little white pills that totally stop you up for a week.  All I wanted to do was run in to the clinic, pay my $20 co-pay, complain about my diarrhea and get the script for the pills.  Easy Peasy, right?

Damn doctor had to do this whole “OMG – You have had this for almost 3 weeks?  We had better make sure there is nothing else going on.  I want you to bring in a stool sample.”  My immediate response was “Yeah, that isn’t going to happen,” but in essence of time, I decided to play along and hopefully speed up my visit time.

First of all, he gave me w-w-a-a-y-y too much instruction for this process that I had no intention of doing. Then he showed me the plastic thingy and I about lost it.  Seriously?  Oh, and a specimen bottle as well?  I was surprised medicated wet wipes and a test strip was not included. And for the record, I totally DID NOT want to walk out of the doctor’s office in front of a waiting room full of patients carrying this huge white plastic monstrosity except that I simply HAD to bring it home to share it with my family.

Which I knew would ultimately result in this: 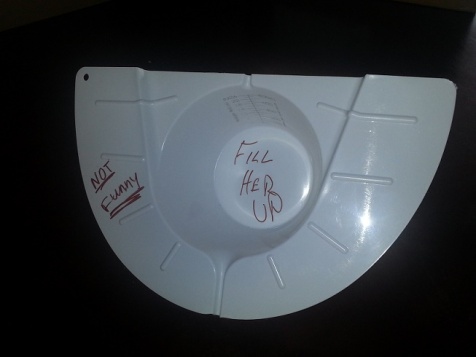 So then I had enough. I filled the specimen jar with Skittles.

And my son ate them all.

So I never did go back to the doctor.  The pills he prescribed took care of the problem.  I also didn’t appreciate the email my doctor later sent to me asking about the colonoscopy that he said I really need to get done but I never followed up on.  Then again, maybe I should schedule it for a future blog topic.  I’ll have to ask Karen.