Every year I have this same discussion with my daughter.  She believes there is no “end date” when it comes to getting an Easter basket full of candy.  I quit making Easter baskets for the kids when they were out of high school.  My daughter even used the religion card and told me that “Candy was God’s gift to all His believers.” Okay, so that semi-worked.  I was guilted enough to get a plastic mixing bowl full of candy for everyone to share.

But that isn’t what Christina wanted.  She wanted a basket of her own.  And a stuffed animal and a chocolate bunny.  I firmly told her if God wanted her to have that, He would have told me and I simply had not gotten that message.

We had a silent truce until I bought a tonage of Easter candy last week.  Christina thought she had won and was all smiles. Until it disappeared the next day when I took it to work for my staff.  My department had decided to get together and make little Easter baskets for everyone and share bringing in candy. You would have thought I was the most unloving, unreligious, worst parent in the world that I would do that for work staff and not for my kids.

I gave in when I found this awesome Easter basket at the grocery store. Filled it with 99 cent Easter grass and candy.  Even remembered the 79 cent chocolate bunny/chicken.  My husband hid all the good candy.  At least we are done with this issue.  Until Christmas when I get to go through this all over again with the stocking that I quit filling with candy 8 years ago. 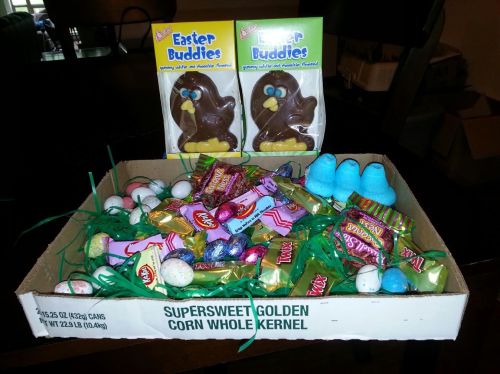