Was it the cat or the dog? Casey – The cement was on his feet.

In all fairness to Abbey, my son’s tennis shoe imprint was there, too. 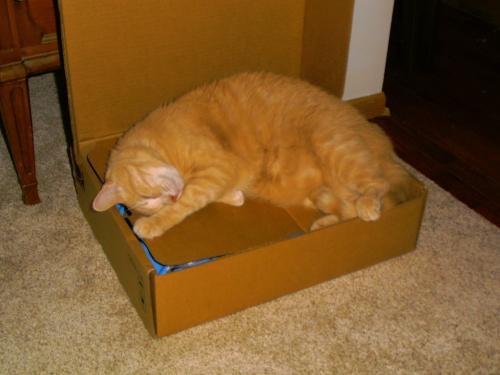 If it is a box, it is considered a Boca Bed 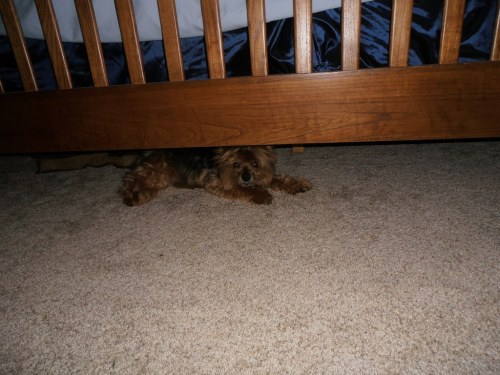 And when all the banging and strange people become too much, Casey hides under the bed.

My 22-year-old daughter moved out of our house and into an apartment with her girlfriend last November.  It was very exciting to help her with this  very first totally independent adult endeavor.  Which makes the following even more understandable:

It is currently 7 degrees out.  This morning is was -2 degrees out. Tonight it is supposed to -15 degrees.    Now, don’t get me wrong, the sun is shining and it is beautiful to see all the shimmery dazzling white snow.  I just want to see it from behind a window while sitting in front of an electric heater that is on its highest heat setting.

But enough is enough.

I can’t take this much longer.  I have learned that once the weather is in single-digits or less, my car heater just can’t keep up with the level of heat that is expected.  My car is so filthy dirty, I feel embarrassed to park it at work.  (It reminds me of when my daughter was little and got head lice.  To this day, she will say that she got head lice twice when she was little.  I’ll agree with that, but it was two times that lasted about two years in duration trying to eradicate those damn things).  Not to mention that just thinking about taking my car into the automated car wash gives me anxiety.  Do you think my doctor would prescribe Xanax for car wash anxiety?

And then there is Boca.  Bored Boca. Even with the cold and snow, Boca will still try to go outside.  From 6 pm to 11 pm he is in and out the back door at least 20 times. The problem is that he has to come right back inside after two minutes. So he wanders around the house looking for someone to torment for his personal entertainment.  Which usually means Casey is a great target.  So on and off all night you hear Casey start to bark and growl and then someone yelling at Boca to leave him alone.  Even Abbey, as big as she is, keeps a wary eye on the cat as he saunters past her.

We did buy Boca some new cat toys which amused him for about 45 seconds.  I get that, I mean how can some plastic balls with bells inside compete against live vermin living outside that you can hunt and kill?  And everyone has learned that you shut your bedroom door at night because if you don’t, you will wake up at 2:00 am with a cat sitting on your chest staring intently into your eyes.

Who am I kidding?  Even though I may SAY this is my last whiny blog about the cold weather, it won’t be. Especially if the Farmer’s Almanac is correct and we do get a blizzard in February.  Just don’t say you weren’t warned in advance. 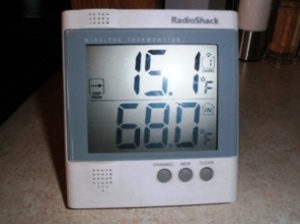 It is REALLY cold outside.

HOW COLD IS IT? 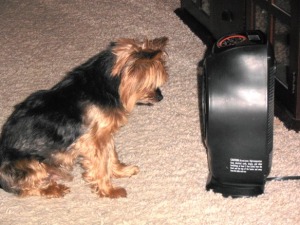 I finally gave in and plugged in my electric blanket this weekend.  I have been hauling around a heated throw and it simply is not big enough and after one year of continual use, there are way too many non-heating cold spots.  We have a dual electric blanket which means my side is on high while my husband’s side isn’t even plugged in.  I am still working on the optimum heat setting.  About roasted with the 9.  Turned it down to 7 and then finally fell asleep at number 4.

My husband and I ended the long battle about the thermostat setting last winter.  He doesn’t understand that 67 degrees means I use the oven as an ancillary heat source and I don’t understand having to pay a perpetual $500 electric bill every month (stupid uninsulated house).  But in an effort to be understanding, he did purchase little portable electric heaters for the kids and me.  They have an auto shut off and are energy-efficient plus a whole bunch of other safety related facts that I have no interest in.  What I do have interest in is that it goes up to 85 degrees and has a fan with a high setting for blowing out lots of hot air.

What I don’t like is Casey hogging my heater.  I get it all set, turn it on and face it toward me.  And then along comes Casey and sits his ass right in front of it effectively blocking my heat. 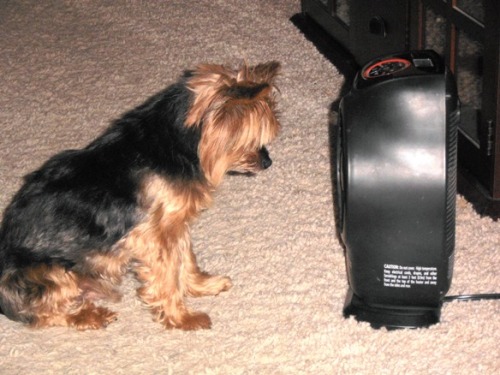 When I tell him to stop it, he does this:

Sigh.  it is going to be a long, cold winter.

We recently took all three pets to the vet for their annual visit.  Yorkie-dog Casey was the worst, as usual.  He actually made the vet inject himself in the hand with his rabies vaccination.  The vet was nice about it but

I still blame Christina who raised him.  Previous groomers have called Casey “Wiggle Worm Squirmy” and “Full of Energy.”  When our current groomer gave Casey his first haircut and bath, she told Christina “Your dog is a Brat.” I love honest people.  (I think the only difference between the groomer and the vet is that we have to pay the vet a lot more so he feels like he has to be more politically pet correct).

And then there is the whole food issue. 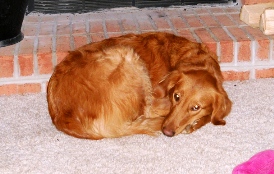 Our Golden Retriever, Abbey cannot eat canned dog food.  No, I take that back. She can eat canned dog food but you are also guaranteed she will have doggie diarrhea afterwards.  So the only dog food she gets is dry dog food.  But Abbey knows anything is better than her dry dog food.  So she will eat the leftover canned cat food, Casey’s canned dog food, Boca’s dry cat food and any food left in the trash or counter (called counter-surfing in dog lingo). The only thing Abbey will not eat is Boca’s dead vermin that he brings into the house and leaves in the downstairs bathroom.

And when Abbey eats canned cat food, she farts.  And they are stealthy and stinky. I can’t tell you how many arguments my husband and I had about who is farting in the bedroom at night until we finally realized it was the dog.

Now, Casey likes canned dog food or dry cat food or steak.  But only the good steak; don’t try to give him the fat or gristle because he won’t eat it.  He has been eating dry cat food for the past nine years.  Our vet said it is okay for a dog to eat cat food, but it isn’t okay for the cat to eat dog food.  Which is fine because our cat, Boca, will only eat cat food (well, except for the vermin that he catches and selectively eats).   And Boca loves canned cat food early in the morning but only the gravy part of the food; he leaves the rest in his bowl. And if there isn’t dry cat food throughout the day you can count on being bitten in the ankles until his bowl is filled.

The other day Boca got into the food pantry and used Abbey’s bag of dry dog food as a scratching post to sharpen up his claws.  All that was left was a shredded mess.

In order to save the remaining dog food, I took out a big plastic container that we had previously used to store cereal and put  the salvageable dog food in it.  And put it back in the pantry.

At first Abbey was excited because she thought she was getting fed dry cat food (also kept in a plastic container) but was disappointed to discover that it was her regular old boring dry dog food.  Once my husband discovered I had put dog food in the cereal container, he said he will never use it again.

I’m thinking  I can use that to my advantage for future reference.